Last month myself and Councillor Mary D’Albert attended Bury’s Annual Council and Mayor Making. This is the annual meeting – part business and part ceremonial – that marks the beginning of the ‘municipal year’.

It was great to be back as a Liberal Democrat ‘Group’ on the Council, even if there is only two of us this year. Mary and I have agreed that I will be the Group Leader and she will be the Deputy Group Leader.

In the formal business councillors are allocated to Committees for the year.
I will be representing you this year on the Health Scrutiny Committee (which is responsible for ‘scrutinising’ our local health services), the Prestwich Township Forum and the Council’s Standards Committee.
Mary will be representing you on the Planning Committee, the Corporate Parenting Board and the Prestwich Township Forum.

Made in Bury Awards 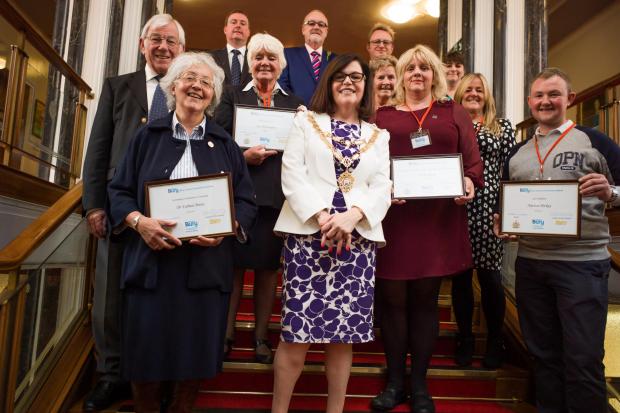 A highlight in recent years have been the community awards given to individuals or community groups in Bury. This year was no exception and awards were given to:
Young Persons’ Group: Early Break
Volunteer of the Year: Ann Bebbington
Outstanding Contribution to a Township: Dr Falmai Binns
Good Neighbour: Nathan Hickey
As a group leader I had the role of introducing one of the awards, to Dr Binns for her excellent work in the more ‘rural’ villages in north Bury around Broadband, buses and a new health walk.

This year the Mayor of Bury will be Councillor Stella Smith. Stella is a Labour councillor who represents the East Ward in Bury. Her husband, and Mayor’s Consort John Smith is a former Mayor of Bury, so the two of them will be reversing their civic roles for the year. The Deputy Mayor is last year’s Mayor Councillor Michelle Wiseman, an independent councillor from Pilkington Park ward in Whitefield.