Last week we reported on the upcoming decision at a Sub-Committee of Transport for Greater Manchester on the carriage of dogs on Metrolink.

Although this is an issue that people have very different views on, the clear public opinion from T4GM’s own consultation is that most people want to allow dogs on trams with sensible restricitons (e.g. on on a lead, some people said ‘off peak’ etc). Dogs are already allowed on our buses, on all trains and on the London Underground. 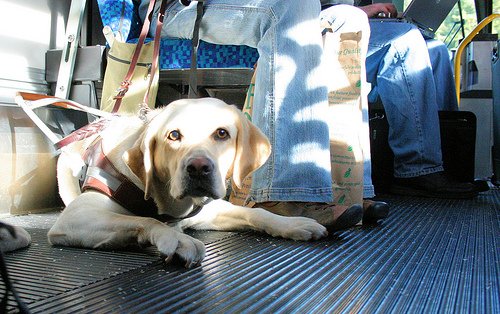 The proposal from T4GM Officers at this meeting was to have a limited, six-month trial of dogs in secure carry cases. Obviously this was a very limited proposal, perhaps only of use to owners of smaller dogs on their way to the vets, but was at least something for people who do support the idea.

Before voting on this, Councillors on the sub-committee were asked first to vote ‘in principle’ whether dogs should be allowed in any form on Metrolink* – most Labour and all Conservative councillors voted to maintain the ban on all dogs.

(* sight and hearing guide dogs are allowed on trams).

The final decision is made this Friday at the full meeting of T4GM, but we suspect that the campaign won’t end there even if they vote no.

If you do support the campaign please do ask as many of your friends to sign the petition before Friday.