There has been a further update on the work on the Motorway bridge which start next week.

Highways England have made some changes to how they will deliver the scheme, following comments and concerns which had been raised.

The plan is now to maintain traffic flows through the day, with traffic lights after 18.30 each day.

Works are due to start from 7 November 2016 until end of March 2017. The majority of the works will take place between the hours of 08:30 and 23:00, Monday to Friday. Weekend and overnight working will be necessary to suit certain operations.

Temporary two-way traffic lights and lane closures will be in place (from 18:30 only) during the dates stated above. As the junction of Kenilworth Avenue falls within the traffic management arrangement, for safety reasons, this will be closed to vehicles at its junction with Bury Old Road throughout the works.

Pedestrian provision will be maintained at all times.

As your local councillors we have had discussions with the Council about the proposed start date of the works on Bury New Road in the village, which we will continue to have, particularly when we see what the actual impact of traffic lights from 18.30 has on the flow of traffic.

We are also raising the issue how people will use the local diversionary route in bad weather (e.g. icy conditions) as we know this has been an issue for residents in previous bad winters. 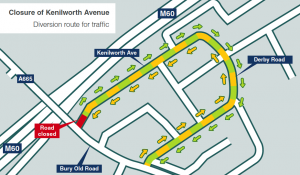