Plans approved (but not yet funded) for ‘Bee Lines’ Cycling Network

The plans were drawn up as a report drawn up from a team led by professional cycling champion Chris Boardman. The plan would create 64 miles of new cycling and walking routes, as part of a proposal for Greater Manchester to create the UK’s biggest network for people travelling by bike or on foot.

For Bury five miles of Dutch-style segregated cycling lanes (the A56 from Bury to the bottom of Prestwich) and 71 new or upgraded crossing points are being proposed to better connect every community in the district and to make cycling and walking a real alternative to the car. 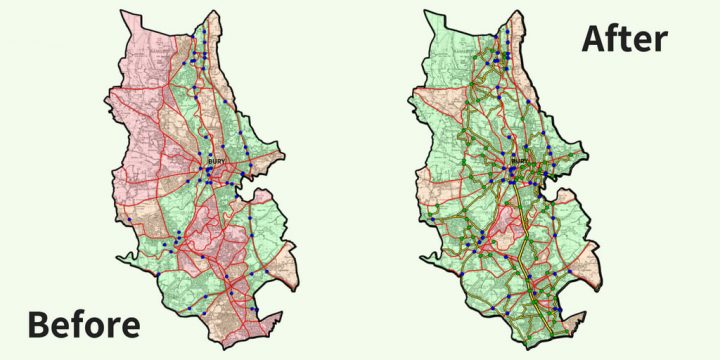 The logic is that at the moment many people are put off cycling because of having to cross busy main roads, so the scheme would link up quieter roads with safer crossings of the main roads.

Maps showing the proposed plans for each local authority in Greater Manchester have today been published on Transport for Greater Manchester (TfGM)’s website. The proposed routes and crossing points have also been published where interested members of the public can collaborate on the plans for their area. The plans represent the first iteration of the network that could be expected to be delivered over the next four years. A second iteration of the map will be published later in the year.

£160 million of funding has been made available over the next few years to make a start on the project, BUT the estimated cost of delivering the full Bee Lines network would be £1.5 BILLION over 10 years, which would require additional Government funding.

We’re really keen to see better cycling facilities and hope that this doesn’t just become an expensive report left on the shelf as so often happens.

Please do get in touch if you have detailed comments on the plans as they stand as we’re going to make some comments to the team before a next draft of the map. One point we are already raising is that the main road cycle route from Bury to the bottom of Prestwich then stops! (IE it doesn’t continue into Salford) – this doesn’t seem common sense.